The Krka Group generated €808.6 million in sales, of which revenue from contracts with customers (products and services) amounted to €806.5 million, Krka's strongest half-year sales to date. Overall sales grew by 4.8 million, or 1% year on year. We can attribute last year's sales results primarily to high sales in the first quarter, which followed the surge in demand for Krka's products during the first wave of the COVID-19 pandemic. The 2021 second quarter sales amounted to €412.8 million, up 21% year on year.

Product and Service Sales by Region

Accounting for 34.3% of total sales, the Group's largest region in terms of sales was Region East Europe. Sales reached €276.5 million, up €4.8 million, or a 2% year-on-year rise. Product sales in the Russian Federation, our largest individual market, totalled €168.2 million, down 7% on last year. Sales denominated in the Russian rouble recorded a 10% year-on-year increase, as the average rouble exchange rate in the first half of 2021 dropped by 15% on the first half of 2020. Sales growth was recorded in most other markets of Eastern Europe and Central Asia.

Second largest sales region was Region Central Europe, accounting for 23.4% of total Krka Group sales. This region generated €188.9 million in product sales, up €6.2 million or a 3% increase year on year. In Poland, the largest regional market, product sales added up to €87.6 million, a 2% year-on-year increase. Sales denominated in the Polish zloty grew by 5%.

Generating €159.6 million, Region West Europe was the third largest region in terms of sales, accounting for 19.8% of Krka Group sales. Year on year, sales lagged behind by 12%, primarily due to expiry of certain public tenders. We increased sales in the UK, France, Ireland, and Austria. In Germany, the largest market in the region, we sold €43.3 million worth of products, recording a 10% year-on-year decline.

Region Slovenia increased sales of products and services by 9% to €41.8 million. Product sales remained similar as last year and amounted to €28.4 million. Health resorts and tourist services generated €13.3 million, a 33% year-on-year rise. Sales on the domestic market accounted for 5.2% of overall sales. 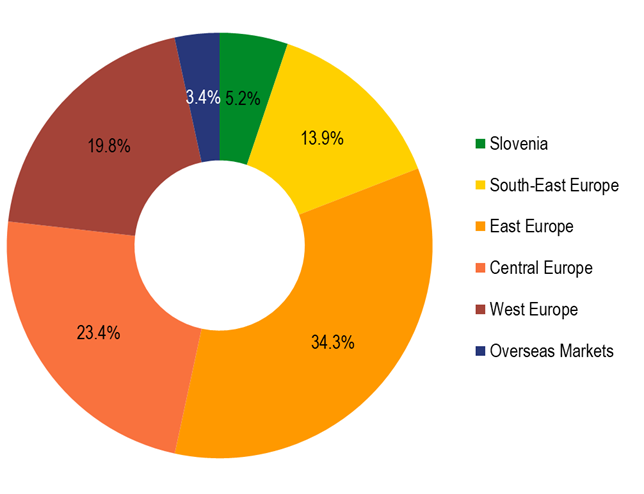 Sales by Product and Service Groups

We obtained marketing authorisations for the following prescription pharmaceuticals:

According to estimates, the Krka Group allocated a good €28 million to investments in the first six months, of which more than €22 million to the controlling company.

At the end of June 2021, the Krka Group had 11,607 employees on payroll. Of these, 46% were employed in subsidiaries and representative offices abroad. As many as 51% of employees had at least university-level education. Together with agency workers, Krka had a total of 12,524 employees on payroll.

The 2021 plan projects sales at €1.535 billion and net profit at approximately €265 million. We intend to allocate €114 million to investment projects, primarily to increase and upgrade production facilities and the infrastructure, and 10% of revenue to research and development.

The Management Board remains committed to pursuing the strategy of a stable dividend policy and intends to allocate at least 50% of net profit of the Krka Group attributable to majority holders to dividend payments, and to investments and acquisitions in due consideration of the Group’s financial needs.

We expect the 2021 business results also to depend on the spreading of COVID-19, related restrictions imposed by individual countries, global recovery after the pandemic, and fluctuation of exchange rates important for Krka. The achievement of the 2021 performance goals is due for publishing on 18 November 2021, together with the updated 2022–2026 Krka strategy.

These cookies are used to adapt advertising to each individual user.

These cookies improve user experience and provide for additional functionalities, which would otherwise not be possible. They are used to record information on how visitors use our website, so that we can improve and upgrade it.

Social networks require cookies for proper functioning of plugins. This enables content sharing and connecting with friends in social media.